The Tuna Niçoise Toast I’m Eating for Dinner All Summer

I’ve shared before about my undying love for niçoise salads, and since I’m also a fan of anything on a piece of toasted bread (ie the avocado toast I eat every Sunday), it was only a matter of time before these two loves united and had a baby. Meet their beautiful summertime offspring, my tuna niçoise toast.

Mouth. Is. Watering. I also posted an IGTV of me making this toast at home the other night – watch it in action right here.

I can’t take the credit for this brilliant combination of ingredients. This toast was inspired by my favorite at Swedish Hill in Austin, which I have desperately missed during quarantine. The café will likely be reopened by the time this post runs (I’m writing it a week out), and I cannot wait to be reunited with the best bread in our city. Anyway, there was a toast on the menu last year that I became obsessed with, like had to have it every Sunday for brunch. When it ended up getting rotated off menu, I got inspired to make my own version at home, and dare I say it’s as good as the original. 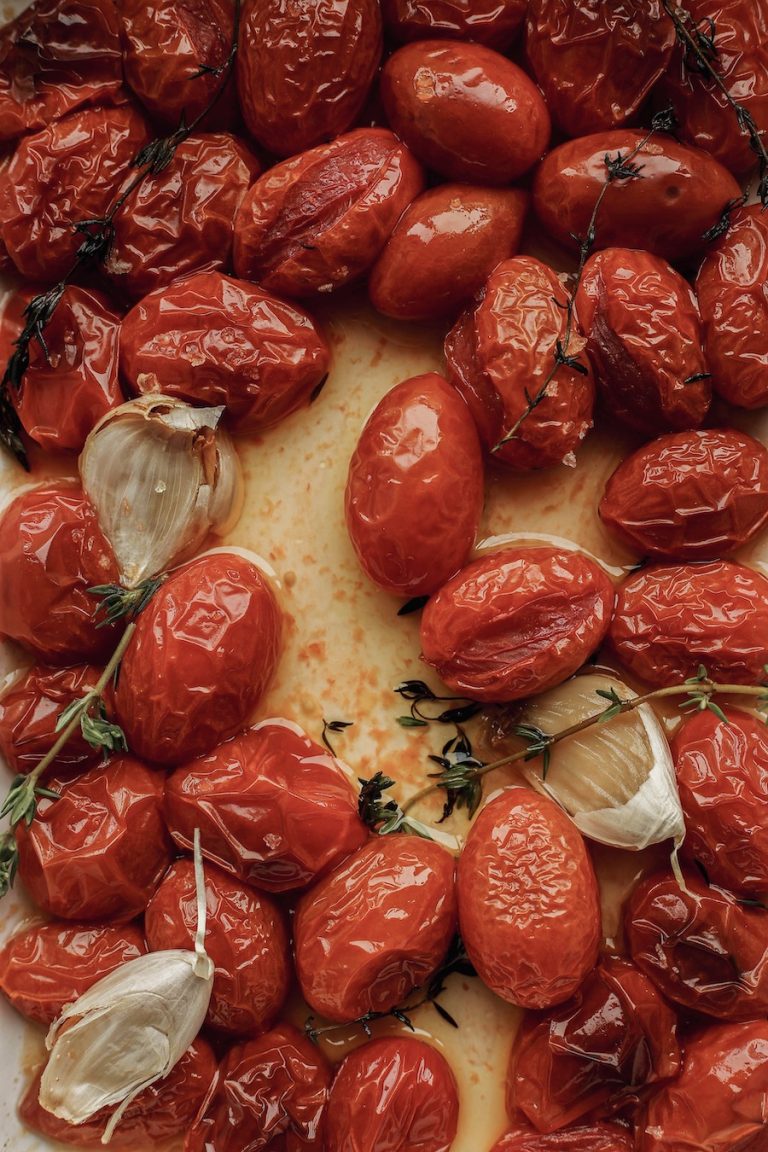 Let’s start with these oven-roasted tomatoes. I tossed cherry tomatoes with garlic cloves, thyme (or rosemary, or basil), salt, and plenty of olive oil, then roasted low and slow in the oven until they got nearly as sweet as candy. I’d never made these before these toasts, but once I did, they immediately became a new staple that I keep on hand at all times. I riffed off the recipe in Gjelina’s cookbook (they serve their tomato confit on a couple different pizzas in the restaurant), and store extras in a mason jar in the fridge. These are super easy with hands-on time less than 5 minutes, but since they require a few hours in the oven, it’s nice to have a batch ready-to-go in case my toast cravings strike last-minute. I also love to spread these tomatoes on pizza, sandwiches, or on top of grilled salmon. 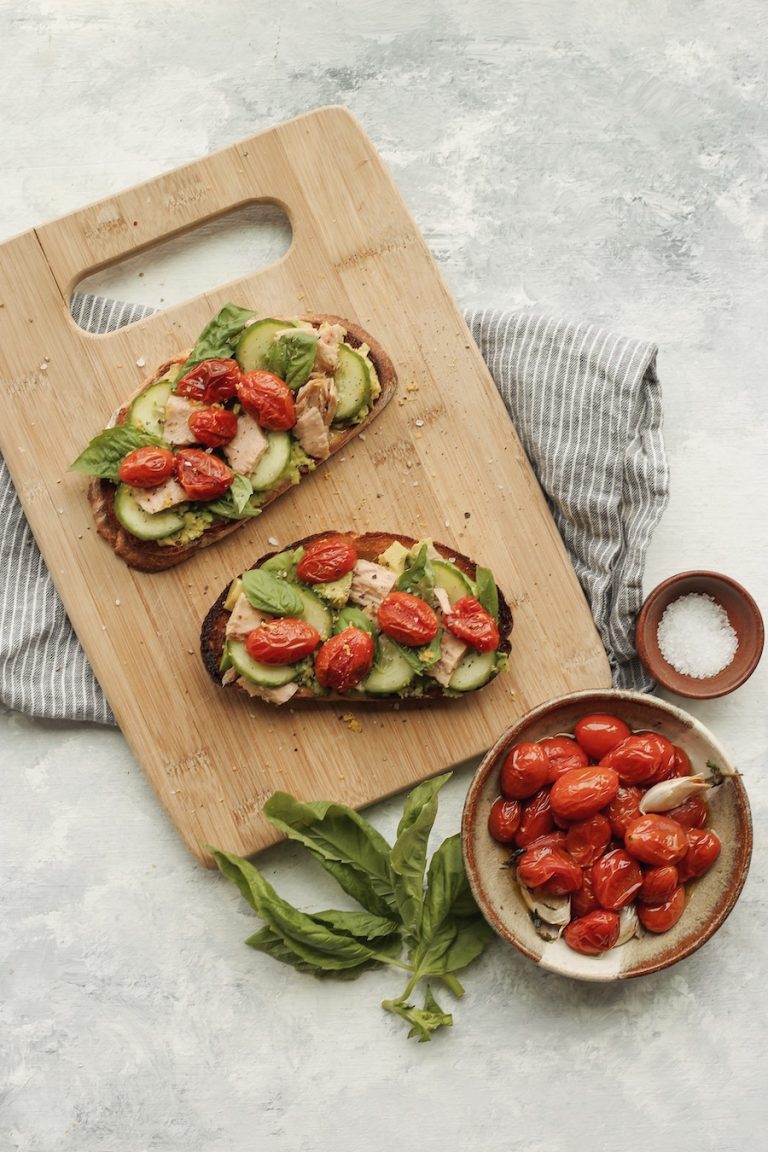 Good crusty bread is a MUST HAVE here. That said, if it’s a couple days old and slightly stale, all the better to soak up that yummy olive oil and tomato juice. There’s something about these ingredients that come together in a way that feels downright luxurious, even though they’re packed with health and fresh seasonality.

I love the vivid green from the kale pesto, and it’s a great way to use up those few lonely kale leaves that may have been hanging out in your produce drawer for awhile. That said, I have used good store-bought basil pesto in this recipe when I’m feeling a little lazier, and it works almost as well. Oh, and let’s talk TUNA for a sec. Did you know that high-quality oil-packed tuna bears almost no resemblance to it’s “chicken of the sea chunk light tuna in water” cousin? The latter tastes like boring diet food, while the former is a luxurious delicacy that reminds me of sitting on a terrace in the south of France. If you’ve only bought low-cal water packed tuna in the past, have I convinced you to splurge for the good stuff? Please do yourself a favor and report back. 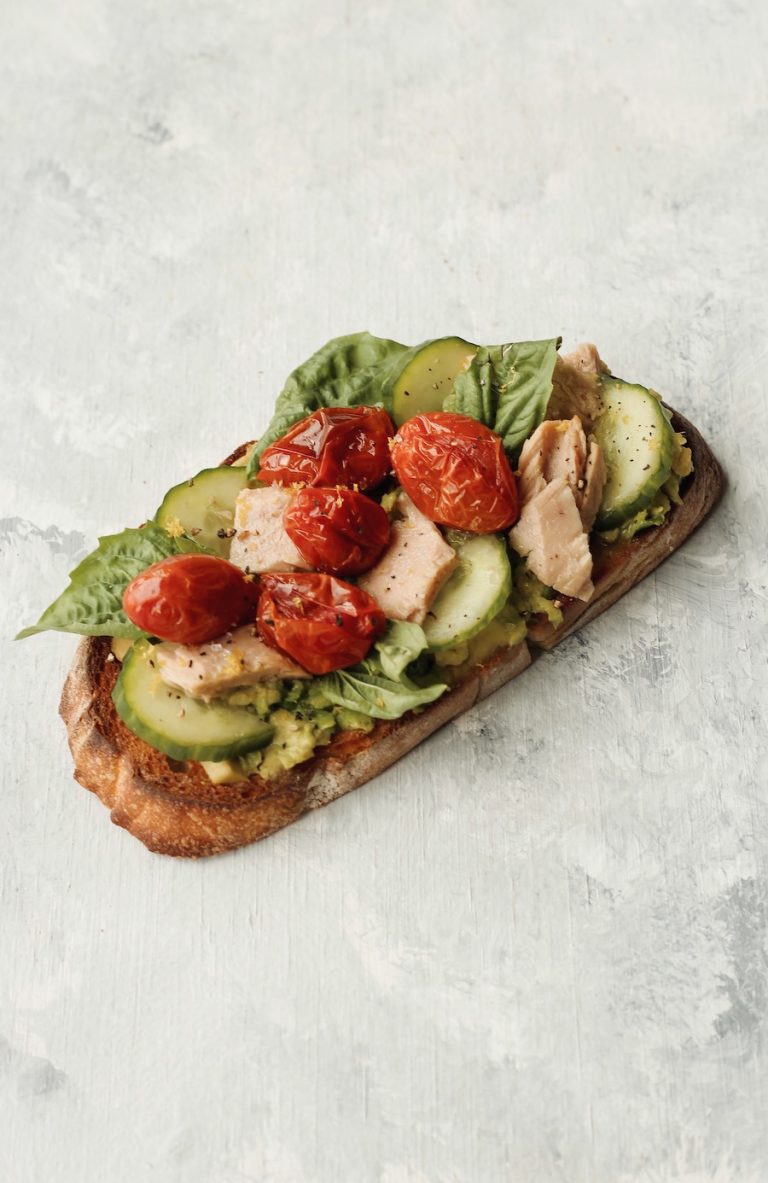 This tuna niçoise toast is summer on toasted sourdough, and I’ve been devouring it weekly these days. Hope you give it a try, and let me know in the comments how it goes! And if you share on Instagram, be sure to tag me so I can see your creation. Scroll on for the recipe…

No Result
View All Result